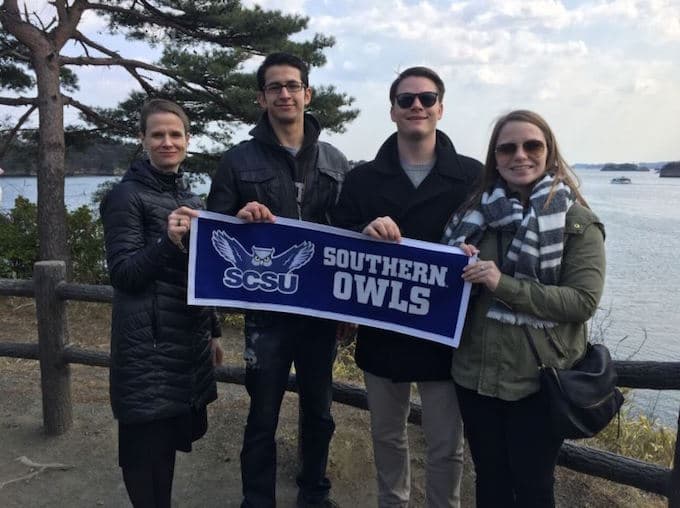 Over this past spring break, three School of Business students experienced the trip of a lifetime. Meaghan Tetro, Jack Dowe, and José Cleves traveled to Tokyo, staying for eight days to explore the city and meet with area business professionals. The trip was coordinated and hosted by Austin Auger, an SCSU alumnus who lives in Tokyo and works as professor and executive business coach. Rather than staying in a nearby hotel, the students stayed with Mr. Auger. Each day, the students would spend several hours meeting and learning from different professionals from a wide range of industries, followed by trips to local cultural sites and tourist attractions. Dr. Erin Heidkamp, director of the Office of International Relations, accompanied the group as a chaperone.

“It was a packed schedule,” she says. “We left the apartment in the morning, and didn’t return until late at night. There was so much to see and do, but it never felt overwhelming or rushed.” She credits Austin for the smoothness of the experience: “He arranged the travel, all the business meetings, all the trips to different spots around Tokyo.” These side trips, she notes, were more than just interesting things to see and do. Learning about Japanese culture – visiting temples, historical sites and landmarks, and government buildings – added a sense of how the country’s culture influenced and grounded business practices and beliefs. 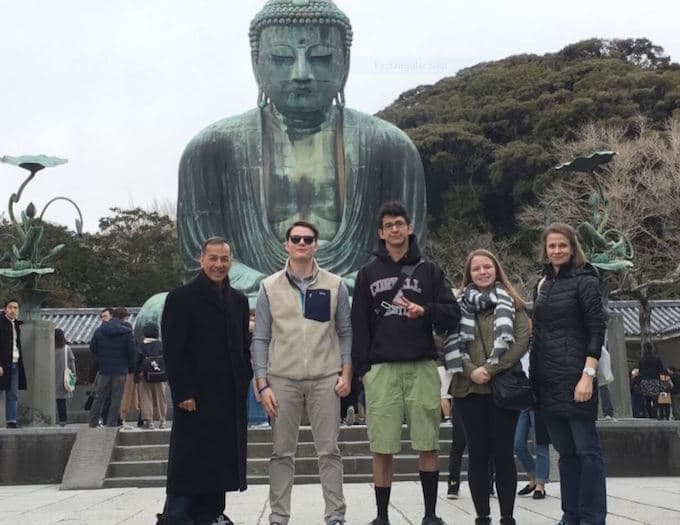 The students were able to meet and talk with representatives from a range of business, both in the public and private sector: Chambers of Commerce, U.S. Embassy/State Offices, Toyo Engineering, Chiyoda, Toppan Insatsu Corporation, Ibina Denka Corporation, Japan Airlines, Kantogakuin University, Seiji University, and several others.

“It was great to watch them interact with these professionals,” Dr. Heidkamp says. “It was up to the students to ask questions during the business meetings and to give comments – they all spoke intelligently and represented the University wonderfully.” All three students, who graduated in May, were carefully chosen for the program, due to their strong applications, high GPAs, and involvement with the School of Business – all are part of the Student Ambassador Program.

The trip was made possible through the coordination of SCSU’s Foundation, the School of Business, the Office of International Education, Austin Auger, and James Barber. “It really was a team effort,” says Dr. Heidkamp. “Everyone worked so hard to make this trip a reality, especially Austin. He’s such a generous person, and was truly interested in giving the students a once-in-a-lifetime experience.”